We watch the news and wonder how an educated country like England can erupt into such chaos.

What’s it all about?

They might have captured images on CCTV that will lead to arrests – and then what?

It’s like a doctor who treats only the symptoms without dealing with the root cause of the dis-ease.

So what’s needed to clean up the current conflict in Britain?

(Ironically, if regular life for a young man feels like ‘walking dead’ – can you imagine the sense of ‘aliveness’ that being involved in this type of trouble can arouse?)

Every image I saw last night of the violence was of young males.

Perhaps we’ve deprived them of environments where they can test their strengths and learn new skills – that they’re seeking some way of reconnecting with the masculine?

What does a healthy young male with testosterone pumping in his veins do, if he’s not given healthy channels of outlet?

Today is the eighteenth birthday of a young friend. There are three sons in the family, local farming lads – strong, talented, intelligent and kind, with two parents committed to their healthy upbringing.

I cannot even imagine these young men being involved in this sort of terrorizing behaviour and vandalism. 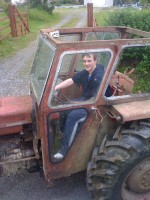 They’re being given the environment for their masculine energy to be something they’re proud of – and something that contributes to community.

So in the areas where young men are not so fortunate, where are the ruptures in connection?

Disconnection from a sense of what makes life meaningful?

Disconnection from a caring, connected  community?

And in particular, perhaps disconnection from healthy masculine role models?

In South Africa a number of years ago, the rangers in one of the large Game reserves were finding mutilated rhino. The creatures were so horribly damaged that the first thought was that this horrific vandalism had been done by poachers. Then they realized that this was not the cause, as the valuable horns had not been removed.

They discovered that the chaos had been caused by marauding ‘teenage’ elephant bulls. Over the previous years, the senior males in the herd had been eliminated by the rangers, as a means of population control. The result was that without the ‘big guys’ to model appropriate behaviour and keep the discipline, the young males went wild.

It’s an interesting tale to reflect upon at this time.

I’m not in any way condoning the behaviour –but all behaviour makes sense.

In my work as a Parent Coach I have repeatedly found that parents will book sessions to see me because of a ‘problem child’ and they are feeling at a loss as how to cope with the behaviour.

As the sessions progress, the issues below the surface begin to emerge. As parents discover how to meaningfully communicate and deal with what’s really causing the dis-ease, the child’s challenging behaviour invariably melts away. It’s not so much that problems are solved – but that they dissolve, once the parents begin to implement change that creates more enjoyable and fulfilling family life for everyone (parents included!)

The interesting thing is that, in retrospect, the parents can see that the challenging behaviour has proved to be a gift – so that they as parents could figure out what really matters and what they are going to do about it to create the home they really want.

An environment for young people to thrive.

The family is the building block for society.

This isn’t just parents’ responsibility – but starting where we are is the best place to start.

We can easily point the finger at these perpetrators – but it’s likely that such anti-social behaviour will continue to break out, like dysentery, unless we deal with the root problems.

“If young men aren’t initiated into the village, they will burn it down just to feel its warmth.”
(Tweeted by  @alantlwilson Bishop Alan Wilson)
Tweet
Share
Share
Pin
0 Shares
Comments
Leave a Reply Cancel Reply